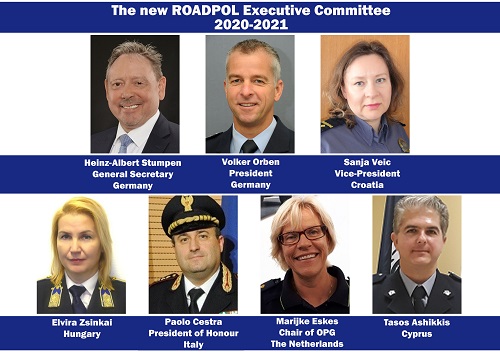 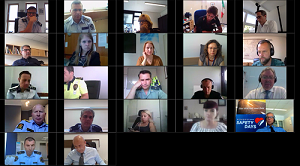 with 96% of the votes. She had already been responsible for the webmaster and media areas as a member of the Executive Committee since 2019.
This is the first time that a woman has been appointed to the top level of management of TISPOL / ROADPOL.

Elvira Zsinkai  (Hungary) was also re-elected with 91% of the votes. She is also in charge of the webmaster and media section and has the main responsibility for ROADPOL's Facebook page, which now has over 2000 subscribers.

Paolo Cestra (Iraly), President of Honour was re-elected to the Executive Committee with 96% of the votes. The former President's experience and international contacts are of particular importance to ROADPOL, especially with regard to the extension of our contacts to Africa and the Balkans.

New to the ROADPOL Executive Committee is Tasos Ashikkis (Cyprus) who received 82% votes in favour. Tasos is a long term member of the OPG and the responsible person for the forum. As assistant to the project management of the ROADPOL Safety Days, he also had a significant influence on the great success of the campaign. He replaces Demetris Demetriou from Cyprus, who unfortunately had to leave ROADPOL due to the large number of commitments he has had to fulfil.

Heinz-Albert Stumpen (Germany) was unanimously elected as ROADPOL General Secretary for the next 2 years.

We congratulate all Executive Committee members on their election and wish them all the best for the following year of their mandate.

The Council also had to decide on two new membership applications.

Abdulla Al Falasi (Dubai Police) explained the reasons for his country to join ROADPOL as Observer. He gave a very informative presentation about the Dubai Police and the development of the traffic situation there.
The application of membership was approved by 96% of the members.

The next country to apply for membership was Portugal. Portugal had been a member of TISPOL in the past. The application was adopted unanimously.

ROADPOL is looking forward to the cooperation with our new and old partners.

The ROADPOL Safety Days also enabled new contacts to be established with the Western Balkan countries, particularly Kosovo. We would like to thank you for supporting our campaign and hope that the exchange with these countries can be intensified in the future.

The next ROADPOL Conference will take place in Cyprus in April 2021. We hope that we will not have to cancel this conference again and hold it digitally. Especially the personal exchange after the official dates is the basis for the success of ROADPOL.