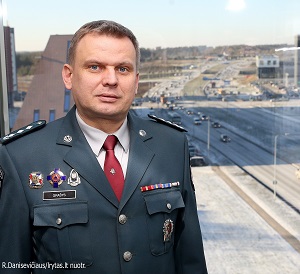 Chief Commissioner Vytautas Grašys (born in 1973) has been working in the police for more than 25 years. The experience of working in the police is reinforced by 4 years of leadership of the Lithuanian Traffic Police Service.
Graduated from the Lithuanian Academy of Law, he holds a Master's degree in Law and Police. During the period of service, he worked full-time in the public police, climbing the career ladder from Inspector to Chief Commissioner. He was head of the Public Order Board of the Vilnius County Police Headquarters and served as the Chief of Staff for 10 years. Since April 2016 he has been working as Head of the Lithuanian Traffic Police Service.
V. Grašys sincerely believes that mutual respect and caution is a guarantee of safe traffic, and that responsible participation in traffic and the pursuit of measures to protect themselves and others prove the awareness and maturity of the road user. He says: „My goal is to encourage good behavior and change public attitude to road safety to avoid meaningless road accident victims (road casualties, road deaths)“.